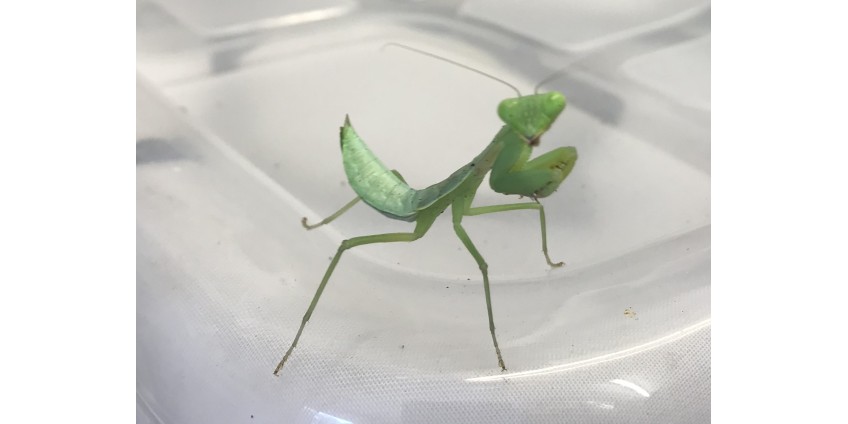 What a hectic week!

What a hectic week! Yes, I did it again, were praying mantis on my shopping list? or Pill millipedes? or any of the other ‘daft’ things that I bought last Sunday at the Bedford bug show, I think not! I did get some super new spiders and scorpions but I was supposed to be cutting down on animals before the winter months.

I say the praying mantis were a daft buy because the main reason I gave up selling them was that I cannot bear to post them. They are constantly shedding their skins as they grow and it is difficult to know when they are about to moult or have just eaten too much. They are also nervous little animals and more likely to get stressed in transit than most bugs (in my opinion). I have put them on the website as ‘collection only’, perhaps I will put the odd one or two for sale by post after they have moulted but really, I hope people will come and collect them. I am still working hard on Ginny’s Jungle and trying to encourage more people to call on me. Take a look at the ‘Buy or Browse’ section of Ginny’s Jungle on my website. Just this week my super friend Karen has designed some new flyers for my business. I didn’t realise that she had not seen the flyers that I had printed by a local design company but I think it is good that she hadn’t as her ones are totally different. I absolutely love them, no photos but cute little comic bugs and lots more written information than my original flyers. I intend to deliver them around the area. Perhaps I can get my nephew’s kids to help, I could make it a competition between the girls. I could ask my daughter to help but she is working again now that the schools have gone back and also studying for her counselling qualification. I’m guessing she would want more than £1 to spend on sweets in Sainsburys (my usual bribe for the girls).

The second animal that I got carried away with is the Pill millipedes. I can hear you all reminding me of the mistake I made at the last show but I asked advice this time and did a quick Google search. The Rainbow ones that I bought were never going to survive, I now know that they feed on something obscure that doesn’t even occur in this country but oh they were beautiful J These new ones are quite small but just so stunning. I bought a tub of five (although I got a discount, they were not cheap), when I got home from the show I set them up in a nice tank with everything a millipede could wish for. I also took some photos and noticed that one of them was not curled up like the others. I hoped it would be ok but the next morning it had sadly died. I just thought “why do I get so carried away”? They are a long-term project, the other four seem fine, so fingers crossed they will breed. They are called Candy Red Pill Bugs (Rhopalomeris carnifex). I put a photo of them on my Facebook page this week.

Have you heard of the Animal Welfare licensing act that evidently begins on 1st October? Neither had I but it seems that everyone exhibiting animals or breeding them will be required to obtain a license from their local council. I called my local council this week and was sent some basic information but I’m not sure how it will work. I am all for animal welfare but this looks very complicated and will yet again, cause stress and cost money for small businesses like mine. Nobody seems to know much about it but it involves a council inspection that has to be paid for and I’m told could cost me up to £800, I really hope this amount has been exaggerated! I’m not sure if it will include invertebrate animals but it will of course be relevant to my reptiles.

Anyway, I have decided that a short blog is better than no blog – I need to get the last few animals from the bug show properly housed today and sort my paperwork too. I still haven’t written up everything that I purchased, I need to put the information on my stock lists and there are still a few animals to add to the website. Unfortunately, I managed to buy a few spiders at the show which were labelled as one thing but on opening the tubs, I can see they are not as named. I don’t think it was deliberate, I think they have just got a bit mixed up. I will house the spiders as ‘unknown species’ and see what transpires as they grow. After all these years I’m pretty sure I will be able to identify them after a moult or two (another long-term project J).

This week’s photo – one of the beautiful Spearmint Asian praying mantis (if you want one, give me a call and arrange a visit!)