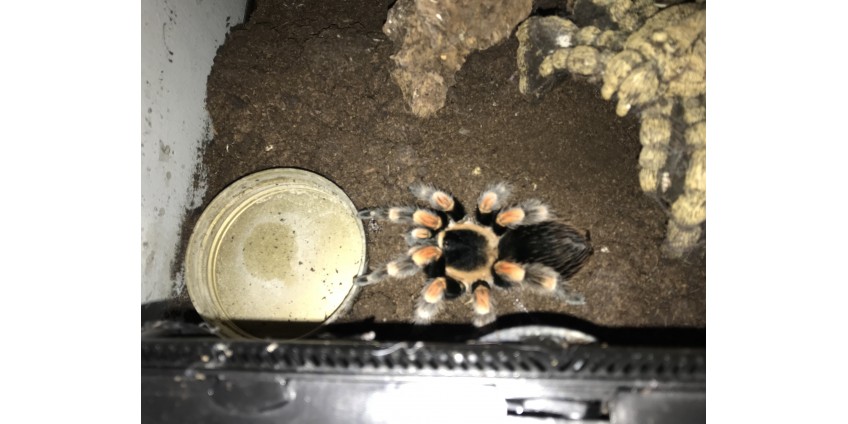 The exhibition was great

The exhibition was great last weekend but “oops, I did it again”. My bug room is now heaving at the seams. I picked up some amazing creatures, tarantulas, true spiders, scorpions, Vinegaroons, Tail-less Whip scorpions, stick insects, cockroaches, millipedes and more. We also had a lovely weekend with the guys from the Invicta spider club who run the event. We went for a meal the night before, when we got back to the hotel I said I wanted a nice cup of tea but was persuaded to have another rum and coke (ok, I didn’t need a lot of persuading) but I really didn’t want to get up the next morning. I needed to get up nice and early to suss out what was there. I did stick to my now famous shopping list and for the first time ever, my scribbled notes of everything that I bought tallied with the money I had spent. Maths is not my strong point and I generally get side tracked and forget to write things down but this time I was spot on!

There were many exhibitors from outside the UK, this is good as it means that there are often different items for sale. I mentioned on Facebook this week that someone at the show thought I looked suspicious as I was walking around with a clipboard, taking notes. They reported me to the organisers, who laughed and said “oh, that’s only Virginia”. Honestly, if I were walking around taking notes for an official reason, I think I would be using a dark coloured clip board, not a bright purple one!

I am still sorting out all the new animals, they have been fed and watered but some need proper housing, labelling and of course entering on my website. Most are now on the website but I do have some unusual things that I don’t have much information on so I will need to research and photograph them before I can add them to the site. I have several species of Ladybird spider, they are so cute. I thought I would get some more as I have done so well with the others that I purchased last year. The secret is clearly that they need to be kept very dry. In the past I have kept them humid like most of my other creatures and they didn’t do well so now I keep them dry and haven’t lost any. I was also told that they can live for 20 years! I was a little disappointed that I didn’t see any Jumping spiders at the show, they really are one of my favourite spiders. Of course, the show was essentially a tarantula show and there certainly were a lot of tarantulas but it was great to see so many other bugs as well.

My daughter has been helping me again this week with my ‘social media presence’ (although it has been a bit difficult as I haven’t had the time to sit down and go through it with her). She constantly drums into me how important it all is these day and I know, but that doesn’t mean I like it. I haven’t admitted to her that I have switched off messages on my Virginia Cheeseman Facebook page. I really don’t want to upset any of my customers BUT almost all the questions asked on Facebook are either easily found by a glance at my website or too complicated for a written reply. I just end up continually asking people to phone me but they don’t, so I’m too busy this week and I’m taking a break from the constant emails telling me that Miss A or Mr B is waiting for a reply on Facebook (I can’t take the pressure). My daughter is keeping up with LinkedIn and she is certainly trying hard to get me more likes on my Ginny’s Jungle page. I had to laugh yesterday, while she was out I put a post on and it only reached a small number of people, with the only person liking it being my daughter’s boyfriend’s mum! I have a steady stream of people liking and following ‘Virginia Cheeseman’ (nearly 2,000 followers) but ‘Ginny’s Jungle’ only has 61! (if you haven’t already, please, please, please, like Facebook - Ginny’s Jungle). I had a long email this week from a very enthusiastic young man who has set up a YouTube channel and wants to come and spend a day filming me in my bug room. He was very polite and friendly so I asked him to contact me again when things are not quite so hectic but it really hit me how different things are these days and yes, I have to admit it does make me feel older (not old! just older and it’s my birthday tomorrow). He said we could ‘even’ talk on the phone! (next to face to face, the phone is always my preferred choice).

Well, must get on. The sun is shining outside but I know it is deceptive, it is totally freezing. I’m sitting at my desk with a heater on next to me and I’m going back in my bug room after writing this. Thank goodness my daughter is around this morning to walk Teddi. I’m not sure if I just notice it when the weather is so cold or if it is a fact? I seem to send an awful lot of parcels to Scotland at the coldest time of the year. I always have a little panic because I imagine it is so much colder up there but everything seems to arrive absolutely fine. I feel awful saying it but I have never been to Scotland. I know I’m always joking about it but I seriously hate the cold and I completely avoid it whenever possible, I’ve never been skiing and all my holidays are somewhere hot!

Lastly, something to ponder. Do bugs feel pain? In my mind ‘of course they do’ but many others seem to feel differently. I read an article in the paper yesterday morning about a campaign to stun crustaceans before killing them, animals such as crabs and lobsters. An interesting idea, I would love to be vegetarian and I would certainly give it a go if I lived alone. I don’t eat much meat but I have no interest in cooking and I would starve if I didn’t eat any meat in this household of carnivores. My hubby is always telling people that I live on rabbit food.

This week’s photo: Lily my pet Mexican Red Knee waiting patiently by her empty water bowl this morning. She generally hides away during the day. I feel sure she was doing her best to attract my attention to the fact that she needed a drink. You may well think differently?