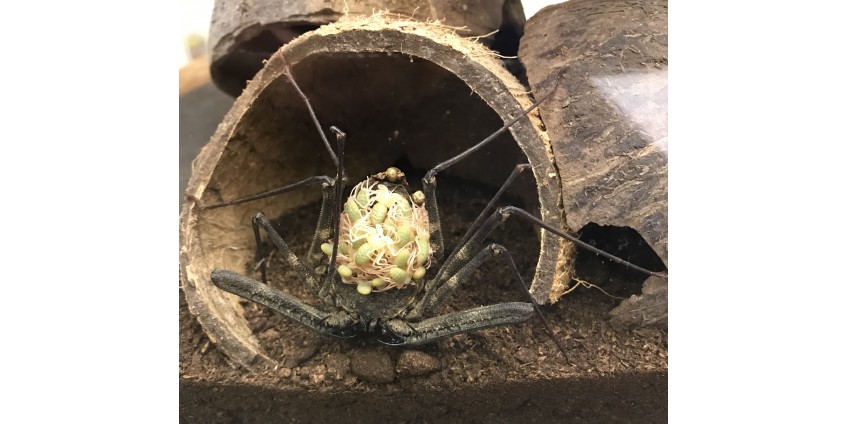 Love is in the air

Love is in the air, that’s the way it seems this Valentine’s week. Spring is just around the corner (only 32 days away now but who’s counting? Me!). This week’s photo is of the gorgeous Tail-less Whip scorpion that recently gave birth in my bug room. Mum and babies are doing well and I don’t think it will be long until the babies leave their mother’s back.

The Giant Black Asian scorpions that I mentioned last week are now all settled in together, I haven’t seen any squabbling so fingers crossed for them getting along ok and breeding. The cage is very large, with lots of hiding places. I checked them just now (as I have every morning) and they are all sitting in their own little territory. Sadly, I don’t think I will be getting any Imperial scorpions anytime soon, so these are definitely the next best thing. I hope they may get used to each other and form a unit but that might not happen, time will tell but if I see any aggression I will separate them again. I enjoyed doing some Valentine’s photos for my social media platforms (not sure if that’s the right word but I can’t think of a better one? Accounts, pages?). My daughter has now reactivated my Instagram account and has been happily posting away this week and telling me how many hits we have got (still don’t get it? – sending pretty pictures to each other?) but as always, she tells me it’s important. I can at least do my own Facebook pages, so I put some Happy Valentine’s Day messages and photos on there and got lots of likes (I would put a smiley face here but evidently it upsets my website as it is not compatible – you will just have to imagine a miserable face here). I love emoji’s what a great idea they are, another idea I wish I’d had first!

I was going to entitle this week’s blog “getting straight again” but then it all went downhill yesterday when things just seemed to start piling up again. I have sorted out my bug room a lot this week and things are far more in order than they were after the recent show but I had a huge number of phone calls yesterday that kept putting me off my stride and side tracking me. I don’t recall any of them being about work! They were dog training for Teddi, carers for a family member, garage about my car etc. I really need a secretary but sadly my daughter was working yesterday (there’s another smiley face).

I have had a lot of parcels to get off this week, certainly not something to moan about, I am very grateful for every one of them. Sales have certainly picked up recently. Obviously in part because I have re-stocked after the winter lull but also because the schools and colleges are now planning for the spring season and beyond. Although I don’t have a lot of bookings for my Ginny’s Jungle parties just yet, I have a lot of people who buy their animals from me to use for their own creepy crawly based parties and animal handling experiences. I had a lovely young lady visit last weekend, she is planning to start up such a business and wanted my advice and some hands-on experience with the various bugs that I use. I charged her a small fee and we enjoyed an hour going through ideas and looking at suitable animals. I was delighted when she gave me a five-star review on Facebook. I would certainly like to expand this idea and have more people coming to me, rather than me going to them. When things settle down a bit I will look seriously at this idea. At the moment I am just telling people that I can’t have visitors to the bug room as I simply don’t have the time and it’s true, I really don’t but if it was a paid for part of my work that would be great. My hubby thinks I should charge £25 for a 30 minute slot and then people can either just look at and handle the animals or the £25 could be used against a bug purchase. It's an idea that I will look into but I can see several problems that may occur.

Anyway, for now I need to get a move on, my daughter will be around to help me today (when she gets up) but she also has a lot of other things to do, like taking her car for a re-test as it failed the MOT earlier this week. I have to take Teddi for a walk now, we are meeting her friends in the park before I start my Friday morning clear up of the bug room. It’s another new idea of mine as I hate working in a mess and the room is looking very messy after this busy half term week. It would be great to start the week on Monday in a neat and tidy room. (well as neat and tidy as a bug room can ever be). One excellent thing about having visitors is that I have no choice but to clean and clear up before they arrive (smiley face).