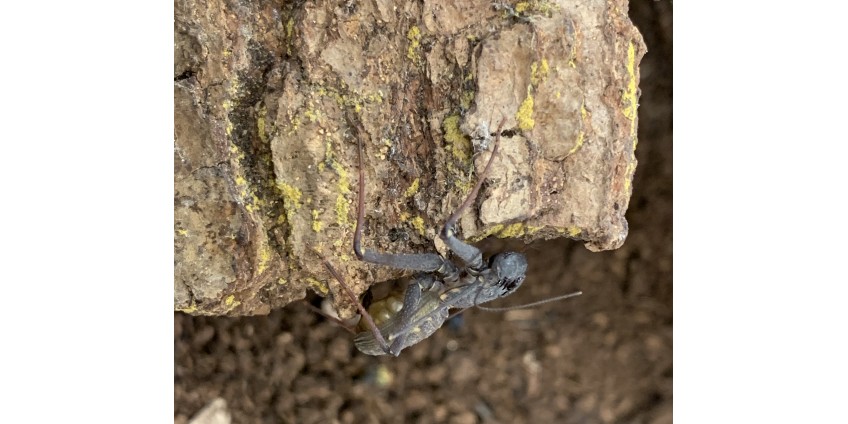 Glad to see the back of ‘Flaming’ June

Glad to see the back of ‘Flaming’ June. It wasn’t ‘flaming’ hot (apart from the first and last couple of days) but it was flaming annoying, so much went wrong for me. Firstly, I had to cancel my talk at the local library due to a mishap with the advertising of the event and then my planned nose operation was cancelled. Not cancelled but postponed and probably until the winter as I can’t find a two-week gap in my diary to recuperate. Then last week, when it came to spider feeding day I looked at my newly moulted Goliath Birdeater spider and realised that she had died. I was very upset, I felt guilty because I think it was most likely due to being too damp (in my defence, it is well known that these spiders cannot tolerate dry conditions) and I must admit that she cost me a fortune and I was looking forward to watching her grow. Oh, and I forgot the IT problems, my husband went to Spain on his annual motorbike trip for ten days and the day after he had gone I went to add a new spider to the “Scientific Spider Names” on my site and realised that 50% of the list was missing. Panic set in as I had no back up but luckily it turned out that my website guy did, so we were able to restore it. That same day PayPal had ‘massive problems’ (their words), payment notification was not being sent out and I had no way of telling who had paid so I had to cease posting orders until it was resolved!

On the bright side both of my Regal Jumping spider egg sacs have now hatched. These really are the cutest spiders I’ve ever seen! My ‘family’ of praying mantids are all doing well and my Orchid mantis has laid an egg sac. The praying mantids are really for my Ginny’s Jungle events but if the egg case hatches I will certainly be selling the babies on my website and the same goes for some of my other Ginny’s Jungle ‘pets’, Katydids, Horse-Head grasshoppers etc. I have some beautiful and unusual arachnids that I hope will produce young soon. The Tail-less Whip scorpions are certainly pregnant as I can see the eggs in their abdomen. I am hoping that my Asian Forest scorpion, Giant Vinegaroon, Red Back Vinegaroon and Desert Hairy scorpion are also gravid but only time will tell. It is so difficult to know if they are pregnant or just fat. Scorpions certainly fatten up before moulting and the moulting process can take many, many months!

I am still continuing to streamline my business, this does not mean that I am giving it up as people keep assuming! I am merely looking at what sells and what doesn’t, what takes far too much of my time to even bother putting on the site etc. etc. I could not keep going the way things were. One person cannot effectively look after the number of animals that I had, so things needed to change (I have just asked my hubby to read through the blog and he said that I should point out here how much daily care I give all my little animals, even the spiders with missing legs, stick insects with wonky wings, scorpions with a missing claw. Most people would discard them but it is not in my nature – hell, I have my cousin’s daughter’s cat living with us for a week, just yesterday I filled in the forms to become my mother-law’s official carer and I don’t get any payment for any of these things!). I am slowly working on Ginny’s Jungle and hope that ‘one day’ it will just naturally run alongside the postal business but for now I will say that my day to day business is approximately 90% Virginia Cheeseman (entomological supplies / postal business) and 10% Ginny’s Jungle (events and handling experiences). I am definitely carrying on – I don’t get a pension for another 6 years!

Next weekend I will be attending another bug show and purchasing a lot of new stock. I have ready, my now famous, ‘clipboard with extensive shopping list attached’. Arachnids are by far my best sellers so I will be focusing on the more unusual tarantulas, scorpions and hopefully I will find some weird and wonderful arachnids like Vinegaroons and Whip scorpions. It would be nice to get some new beetles, perhaps millipedes but I am hoping not to be tempted by any leaf eating bugs and I do think I have enough praying mantids to be caring for! They are amazing for Ginny’s Jungle events and for photographs, they make great pets but they are a lot of work on a daily basis when it comes to keeping them. They are so beautiful but they need to be kept separately, sprayed with water every day, fed frequently and are not at all forgiving if conditions are less than perfect, especially when they are coming up for a moult. If you want me to keep an eye out for anything in particular at the show, just ask and I will add it to my list J

I read a really good article in the R.E.S. (Royal Entomological Society) magazine a few days ago. I’m not a great reader (never have the time J) but I was captivated. It was an article by Richard Lamb, the manager of the Stratford upon Avon butterfly house. It was all about the workings and intricacies of running a successful butterfly house and pupae company. It took me right back to my days at the London Butterfly House and I felt very nostalgic, I also thought that it is still relevant to me today. People are always asking for advice on how to keep various bugs but it is not an easy question to answer as there are so many variables. The main thing that all cold-blooded creatures need is the correct temperature and humidity. Obviously, a gauge to keep an eye on these two factors is good but after all these years I mostly rely on instinct, not something that I find easy to impart to others!

This is certainly a problem when I go away, even for a weekend. When we went to Dorset a few weeks ago I was horrified upon our return to find the bug room so hot that there was a risk to the animals. I had tried to explain to my friends who were looking after things but like most people they thought being hot was ok for the bugs and that being cold was more of a problem. In reality both extremes of temperature are a threat to life. When people ask about their set-ups I try to explain that a gradient of both temperature and humidity is best as the animal can then chose. This is why on my website I simply title my care notes as ‘how I keep mine’. So many variables come into play, the type of cage, temperature of the room, size of cage, proximity to a window or door, heating used and the list goes on. A perfect micro climate is not easy to achieve. Too hot and things dry out, too cold and animals stop feeding and mould can begin to grow. If you have one or two cages it’s simple, if you have a whole room full like me it’s not!

I mentioned last month about buying a leech from the BTS show. Not one of my better ideas, I think my daughter could have been right, possibly the daftest thing I have ever bought. The plan was to use ‘Dracula’ as part of my Ginny’s Jungle talks (the only time my mum ever really freaked out was when I lost a leech in my bedroom). However, in reality I don’t know how I am going to feed it. My original plan was to stick it on my arm every few months when it required blood but then I thought about the fact that this leech has been fed on blood from an abattoir in the past and it may carry diseases like Mad Cow disease (I know I am already a mad cow). Anyway, I’ve chickened out, I don’t fancy feeding it on my blood, I have a friend who said she would do it but I don’t want to risk it with her either, there is no way I am ever going near an abattoir so I think I need to find Dracula a new home. I have been told that they are great for fishing but my pet leech is definitely not going on a fishing hook!