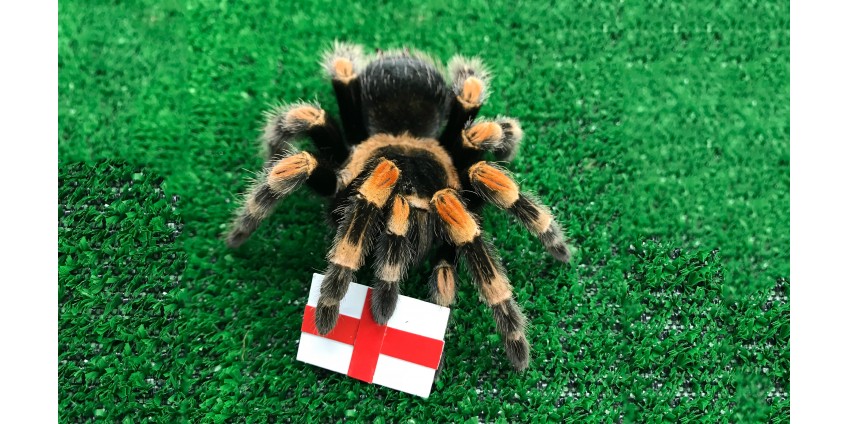 Friday 13th, never a good omen. I intended to write a ‘proper’ blog this week but as I am going away next week, I have just run out of time. I never run out of things to say but I frequently run out of time to say them J I’ve had a busy week dashing around both for family and also drumming up business for my Ginny’s Jungle animal encounters. I visited a care home this week to discuss taking the bugs along to visit the residents. I’m pleased to say the entertainment’s lady was lovely and really helpful too. She is going to book me shortly (I forgot to take my diary!).

Did you all see my photos of various bugs with their England flags? According to Facebook it reached well over 1,500 people, with plenty of comments and shares, a very good post indeed. It was fun to do and I intended to take many more photos before the final but sadly it was not to be. I so enjoyed the football and really believed we could win.

Bon voyage, I will be sailing the seas with my mother in-law this time week. We are flying out to Croatia (can’t bear to say the name) on Thursday 19th and are back on 29th. I will be uploading my now famous pink box onto the website today. It is just an information header to let people know that I won’t be around (my hubby and website guy don’t like the colour or concept) but I think it is necessary to let everyone know I won’t be available. However as soon as I put it on the site my customers desert me. The idea is to encourage people to place orders before I go but it seems to deter people. There isn’t much I can do about it but just in case you do want to place an order before I go I will be sending out orders next Monday and Tuesday as normal!

I mentioned in my last blog that I was cutting down on bugs that take up a lot of time and just don’t sell. Many of my stick insect species have now gone and I’m looking sensibly at the beetles. I closed the ‘beetles’ category some time ago and moved the remaining ones to the ‘miscellaneous bugs’ page. I love beetles and used to keep quite a few species but I realised the other day that I actually still had two species of beetles showing on the website that I haven’t had in weeks. I can’t believe that nobody attempted to buy them so they are definitely going during my shake up of what to keep and what should go.

Anyway, I wasn’t writing a blog this week!

This week’s picture: probably the most popular of my Facebook football photos - Lily the Mexican Red Knee, she took a lot of persuading to hold that flag J