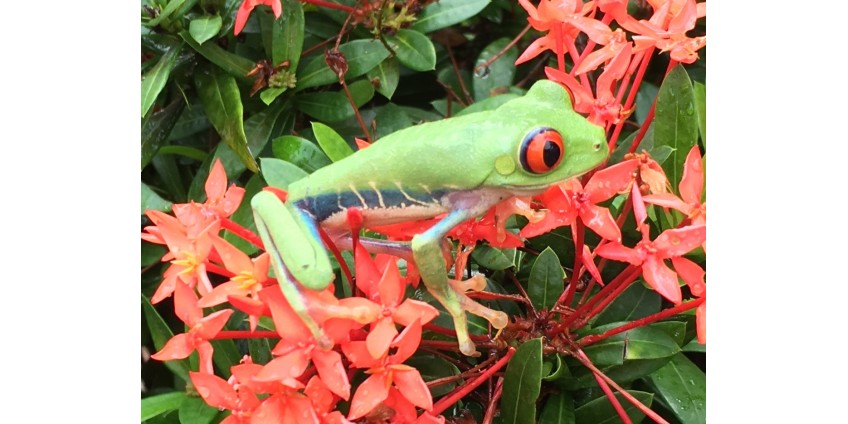 Costa Rica, heaven on earth! Where to start, our two weeks in Costa Rica were like nothing I have ever experienced before. The nature was astounding and the ethos of the country is super, they are certainly trying to preserve their animals and plants. I am so grateful to our wonderful son for taking us and for our wonderful daughter who stayed behind to care for my menagerie. After the shocking year we have endured as a family, it was truly magical. I have a zillion photographs and enough memories to last forever.

I think you probably all know by now how much I love snakes and seeing them in the wild is probably my favourite activity in life! We spent the first part of the holiday touring around different areas and the last five days on the beach. We did three night walks and many daytime walks with guides. It turns out that our son is great at spotting snakes! We saw an Eyelash viper, baby boa, bright green pit viper, Vine snake and several others. We saw lots of stick insects on the night walks and when we get all our photos sorted I hope to get as many as possible identified. My husband and Alex (our son) took proper camera equipment so they got much better shots than me on my iPhone, plus I was too busy looking to take photos on the walks. I could go on forever (I probably will over the next few months J). I did have a laugh when Alex showed me a photo of a stick insect ‘smiling’, I had to point out that it was the tail end! We had great fun with the Iguanas, they roam around at meal times, like cats when you are on holiday in Europe. I say ‘we’, I was the only one feeding them but they were just so cute. I did come a cropper one breakfast time when I was happily feeding a female Iguana with grapes. A much larger, more nervous male came along and as he lunged at the grape, he caught my thumb. It soon healed and was well worth it for the enjoyment value. The female looked like she was going to jump up on my lap so I made sure I covered my legs after seeing her very long claws! I resisted the urge to feed the Racoons by hand, my good friend Matthew who does animal rescue around Europe, gave me a lecture on Racoons and rabies before we left. I had planned to get rabies jabs but I was too late. I now know that rabies jabs have to be done over a three month period.

Two weeks was a long time to be away from my bug room and I was very worried leaving everything but Georgie did a great job (along with help from her boyfriend Josh). She did find that feeding the stick insects was a constant chore. I wish I had cut them down more before I went, she obviously spent a lot of time collecting bramble (I think Josh had the job of holding the torch while she actually did the foraging). I fed all the spiders and scorpions a couple of days ago and was pleased to find that there were no casualties while I was gone (and no escapees either, I put elastic bands around all the scorpion boxes. I don’t know how they do it but the large black Asian scorpions are forever escaping in the night). Actually, that is a story to tell: in the posh beach hotel (too posh for me) I opened the door one morning to find a scorpion underneath. It was a beautiful specimen, I put it in a glass and released it behind the hotel (literally in the jungle) but afterwards I thought about it and did feel a little concerned as it certainly looked dangerous and I do have a habit of walking around without shoes). I posted a series of photos on all my Facebook pages (Virginia Cheeseman, Ginny Cheeseman and Ginny’s Jungle). I had a helpful Facebook reply from Christopher James Rogers saying that the scorpion may be a Centruroides species.

Another story that I just have to tell is that on our second night walk Alex’s partner Lucy was bitten by a Bullet ant. She is one brave lady, they are rated as having the number one most painful bug bite in Costa Rica and she didn’t want to make a fuss! Our young guide was very concerned and rushed off to get painkillers for her. He whispered to me that the pain would be worse later and he was right as poor Lucy woke in the night in excruciating pain. Me, I would have been demanding a doctor and sure it was going to be fatal but Lucy just turned up at breakfast as if it were nothing. Mind you she did skip the next night walk and who could blame her, all this bug hunting is new and totally alien to her, poor girl. Actually, she didn’t miss much, I know there is a clue in the name “rainforest” but honestly did it have to pour down quite so much? That night we saw nothing in the way of bugs but we did see a super snake and an Olingo (looked like a large pussy cat at the top of a tree).

Right, back to reality: this may be my last blog before Christmas so Merry Christmas and Happy New Year to you all just in case! I have come back to everything needing feeding and cleaning in the bug room, my pets needing attention (took Teddi to a new dog training place yesterday), family needing attention (mother in-law, daughter has interview for job today) and b****y Christmas to prepare for (where did that come from?), I need to get cards, presents, crackers, food. Christmas will seriously have to wait until next week, my desk is piled high with paperwork, much of it from before we went. I have sorted my emails, Facebook and phone messages. I have to admit to skipping some but people can always phone me!!! In the New Year, I really need to learn to prioritise, my husband is constantly telling me this and I know he is right. I try to do everything and please everyone and I end up in a pickle. Perhaps I will make it my New Year’s resolution. I’m certainly hoping that 2018 is a great year and I have lots of plans in place to make it that way!

I haven’t yet seen any of this year’s ‘I’m A Celebrity Get Me Out Of Here’ but I did have a laugh when I read this in the paper yesterday “The seven remaining celebrities were asked to nominate one person to make their way through a tomb filled with cockroaches, scorpions, crocodiles and snakes”, I just thought “let me in there”. We did see crocodiles, well caiman but they looked like crocodiles to me and I was close enough in the boat to almost touch them (probably not a good idea J).

This week’s photo: It has to be the Costa Rican Red Eyed Tree frog, their beauty bought tears to my eyes.